From previous posts, I have considered the views of Barthes, Szarkowski and Berger. I find all three to have relatable views, that photography is broadly split into emotive and objective – that being the ability for an image to ensure emotive or objectification of a subject.

Granted each has their differences, and their journeys follow different paths. However, it could be agreed that the primary argument is there.

It is here that I have to ask a question around the dimensions of photography. Barthes tells us that we, in general terms, often put on a persona when we have an image taken. That persona is in the form of a pose, which itself is often an automatic reaction to the camera. This creates an image that is effectively a false status of the self. One that we try to control, but others can corrupt.

This is very true for the mass production of images on, let us say Instagram, but what if we wish to push this further?

Szarkowski works on composition and his five characteristics of photography, indicate to me that the visual media has four primary areas of expression:

Snyder & Allens 1975 Ways of Seeing argues in loose terms that images can be what we choose to make them. We as a society can and do, choose to manipulate the truth for personal, commercial or political reasons. Look at the images and controversy surrounding Donald Trump’s inauguration compared to that of Obama!

This manipulation, done visually, has produced a series of globally recognised works that have changed a generation, altered the course of conflict or toppled/made leaders.

One of my main interests is within the history of war photography and the study of how such images inform society and drive political and social decisions.

It has been long known that many great images originating from war are often manipulated to meet an end desirable by the political views of the time. This was most apparent during the early days of conflict photojournalism.

The cameras of the day were often tricky to use, and so achieving actual conflict images were hit and miss at best. The staging of the images was often seen as the best way to get the scene the photographer wanted – often a the detriment to their practice.

While it is acknowledged that there are many great examples of true reflection within a conflict, it is the demand from the viewer, political belief or need for propaganda that often pushed photographers to create or alter compositions to become something more.

Let us look at some examples:

The above image became synonymous with the wartime slogan “Keep calm and carry on” and has been recognised as one of the great iconic images of the blitz during the second world war.

It is however not real. Granted the scene is very much a real view of the bombed streets of London following a raid on the 9th October 1940. The firemen are indeed putting out a fire, and the ‘milkman’ is very much stood on rubble.

However, the milkman is fake. He is Morley’s (photographer) assistant. It was Morley who decided to borrow the coat and creat from a local milkman and stage this image.

My question is why? Could Morley not have used the actual milkman here? What prevented him from pushing this image further, was it a case of a will to control the scene?

When you look at the image objectively, you do start to see that the figure is out of context. He does not fit the scene any longer, and he looks out of place. This image rapidly goes from being a great, decisive image to one that has been altered for political means.

The end effect was a boost to society, and the will not give up. So to counter argue this question of authenticity, we could say the image did its job.

It is this notion that the ‘photograph did its job‘ that resonates with my practice. The idea that often its the image itself, not the photographer, that has a job to do, is one that does stick with me.

It is not just within a conflict. This is the case within advertising, music and events coverage, commercial work and all forms of objective photography. You could argue this is so for a majority of photographs taken with a purpose in mind.

In terms of staging a photograph, I see that the photographer moves back to realms of a painter, staging a scene for the will of the audience. This was discussed at length by Berger, who considered, that within the world of fine art, the painter lives within the static composition of an image.

One of the most famous and often controversial images of ‘staging’ is that of the US flag raising in February 1945 on Iwo Jima. 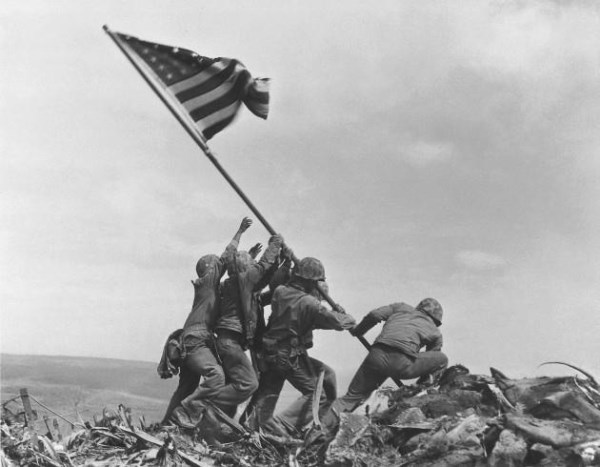 The above image is known the world over. This image appears very different from the original taken a few hours before as seen below:

There is a great deal of backstory to this image, and it can be read here.

However fundamentally the images were taken by two different photographers. One during the fighting (Lowery) and one after it was over (Rosenthal) The latter allowed the flag to be replaced, as it was decided that a more significant flag was needed so more people could see it. So the scene was reenacted to become what is now known today.

This story has led to lengthy debates and even Hollywood films on the subject, due to the controversy it left in its wake. Amongst which are numerous claims regarding who is seen in the original frame and who is in the ‘reproduction’.

The purpose of its inclusion here is just that. It is an image that we remember and recognise. It is one that brought a nation together and has stayed with us for over seventy years. Fundamentally the image taken a few hours before, by Lowery, is the accurate representation of the scene.

I see this as being a visual example of Snyder and Allen (1975) Photography, Vision and Representation. The fact that images can be subjugated and staged to meet the demands of the audience is not something new to the world of photography, and it has been around since the medium first became mainstream.

Photography’s ability to morph into something that can change a society’s direction and inspire a collective is almost unique. In the case of the above, it was for the good of the respective nations – or to counter argue, the bad for the nation on the receiving end.

Photography, when used within the context of any conflict is, after all, itself a weapon.