These weeks challenge we were tasked with meeting someone new. And the task was to network with others. I feel that this week I shall combine both of these into one.

Firstly networking. I chose to develop my online collaboration and find ways of interacting and meeting photographers from all over the world. I recently chose to join The Association of Photographers (AOP) and the Royal Photographic Society (RPS) along with entering some competitions.

The latter I had not attempted in any real way before, apart from an annual urge to enter the Countryfile Photo competition (this never happens) – which ironically was won this year by a chap I know, taking pictures along the River Otter – See Pole Position.

I looked around at a number of competitions and found that many require payment to join. These, in turn, offered a number of ‘carrots’ to entice you to take part.

Whilst I have always been sceptical of this – largely as you just don’t know how transparent paid competitions are – I chose two and entered some of my images as a trial. My main hope was to get portfolio reviews from different sources, to help boost my understanding of creating effective portfolios and to have a roll of the dice.

The first competition I entered was the 2018 International Photography Awards. I entered an image from 2017 into the student category, under events and culture. This single image (shown below) was one I had been bounding around for a while. I didn’t feel that my current work on the river was up to scratch for this. 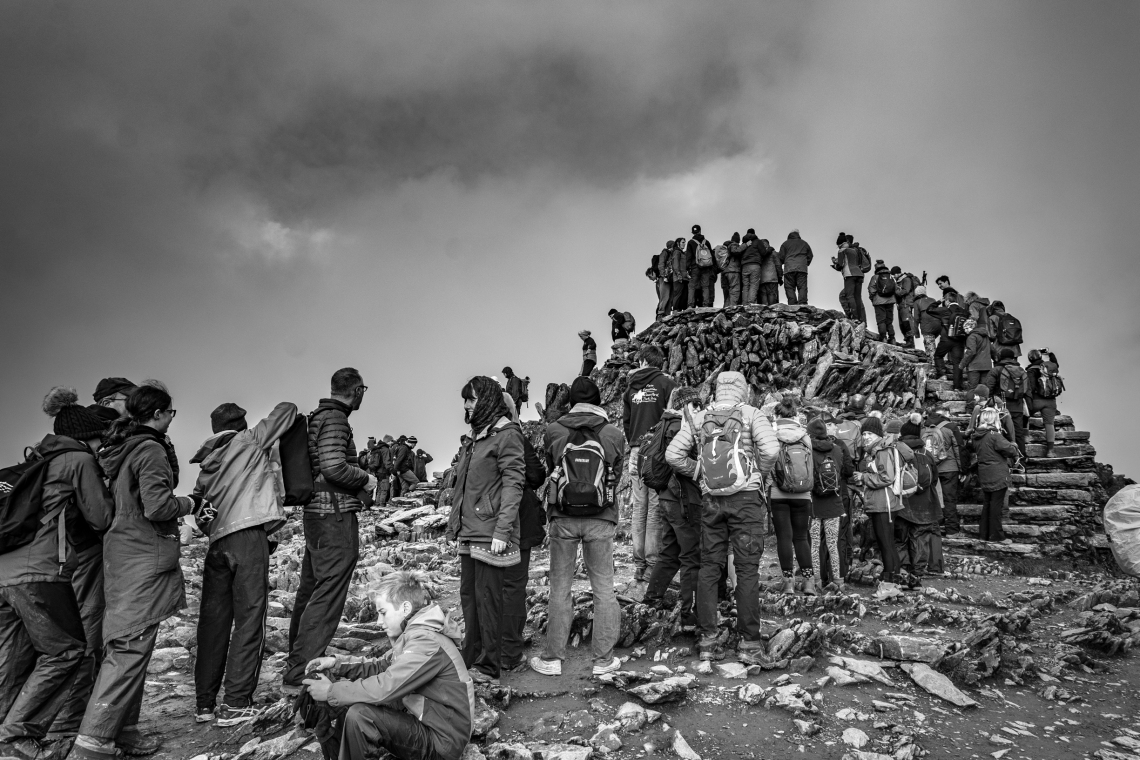 A few weeks had passed after the deadline, I was shocked to receive notice that I had been awarded an Honorable Mention in the 2018 International Photography Awards. This was my first real entry to a competition and the notice was very unexpected.

The award really had an effect on my confidence as a photographer. An element of shyness that I had experienced in my work over the years was slightly lifted. The fact that the image had been taken from the top of Snowdon whilst I was freezing cold, wet through and had a reoccurring knee injury, that meant it would be five full hours before I was to eventually get off the mountain (I limped all the way down), simply made it all the more interesting.

The second entry was for the LensCulture Emerging Talent Awards 2018. I am a big fan of LensCulture and took part in this largely as you get feedback on your submission. I sent in a set based on the 2018 summer solstice. I didn’t win but I received some very interesting feedback. Compfeedback

The image submissions are shown below: 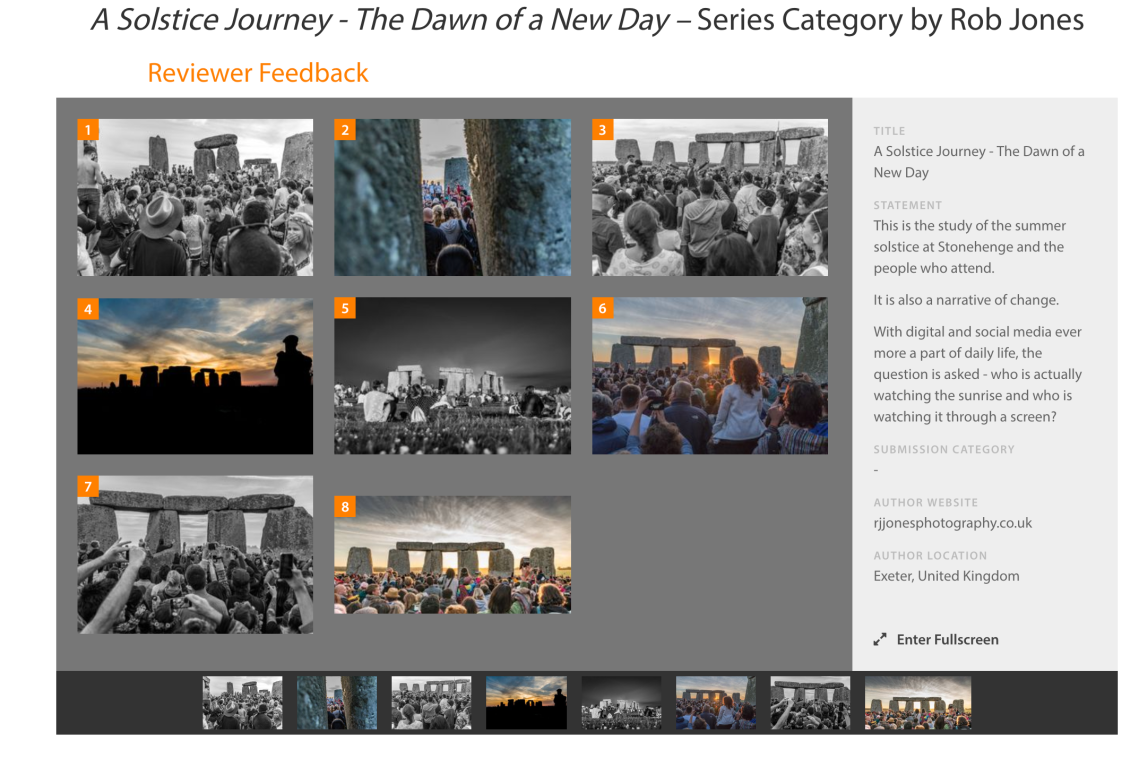 The single image mentioned in the feedback is: 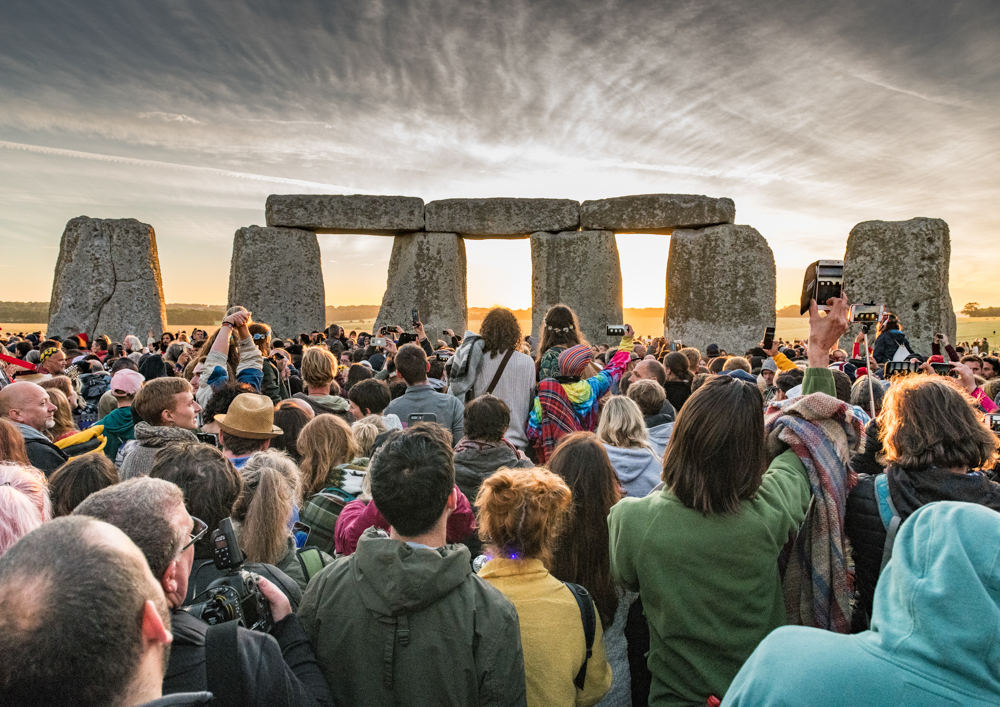 This exercise and subsequent feedback have given me a lot to think about, as it clearly demonstrates the difference between an image that ‘I’ like and would use due to that reason and an image that the wider audience sees as more ascetically pleasing.

This shows that to be effective in the world of photography, it’s not always about what you as the photographer likes, but what the market is after.

I much more prefer the Stonehenge image, but feedback on the Snowdon image has been consistently more positive. I am now looking to enter some craft fairs, so the learning from this may yet come in useful.

My second piece of work this week – and during the duration of this module has been, and continues to be, joining networks and forums to meet and connect with people around the world on photography.

I found there was a real mix in reception when it came to networking opportunities within the different associations. By far the AOP and RPA are the more open, welcoming new members and being open to discussions on current practice and so on.

Some forums and networks I have joined however are very much of a clique (I won’t name any) and are very much moving away from developing talent, to a siloed and more insular approach. This is largely driven by personalities of the few, against the hope of the many.

Over the years I have often sort constructive and creative feedback on my work, only to find that – outside of the usual friends and family comments – true critique of my work was challenging to find. It stifled my creative growth for years and put me off going commercial as I lacked any confidence.

In the end, one of many reasons I chose to go for this MA is that I saw it as an opportunity to finally get direction and to be challenged in my work. But is it not sad that you have to make such a move to get developmental support on work?

After attending a network of photographers in a local town recently, I was saddened to see that – when I was asked what lighting rigs I used when shooting outdoors – I received a reaction of shock, disbelief and distrust from the group when I said none – I use natural light!! Oh, the shock of it all. I was then present to a show of forty men cooing over three female photography models that had shown up, in what can only be described as a voyeuristic demonstration of testosterone – all in the name of portraiture.

This is not photography (commercial or passion), its just pure ego in my view.

This is the side of photography that I don’t like. It’s very much – who has the biggest lens, or the most expensive lights and camera. It’s not (more often than not) about developing and helping each other to become more proficient.

Too often in the industry, in fact, the whole of the arts industry, we see good talent snuffed out or disregarded in favour of ego – those loud few that have to drown everyone else out. Does a big ego really drive success? or do people just hold it up for fear of its rejection, negative critique or damnation?

Those with experience or true talent sometimes will not help those up and coming. Instead, some feel fit to complain that ‘newbies’ or the contextual topics within the industry are just simplifying the practice to a level not worthy of there own presence.

We were all (and are) beginners once, a fact that seems to be lost on some.

I believe that true photography is a dying art. Rapidly being lost in a world driven by the social media and ever-growing AI generation.

For many, the world passes by through the glow of the LCD screen,  like a passenger on a train watches the countryside fly by. Distracted and detracted from what’s real.

In this new world I have to ask, what place does photography have? What will it look like?

This new world is, in my view, an echo of what it once was. A world where creativity is snuffed in favour of Instagram views and pictures of my dinner.